A few months ago my parents and I were sitting and talking about their youth. My dad grew up mostly in Quebec in the Gaspe Region as an Anglophone Protestant. His father died when he was very young, as did his two sisters Diane and Barbra, of tuberculosis, which was rampant in those days.  His mum was a nurse and, now a widowed mother (and probably suffering from trauma and grief) she had to earn a living in her profession.

She was offered work as a Nurse in Chalk River, Ontario but she could not bring her remaining children with her under the terms of her employment. So she put them in ‘a home’ as my dad remembered. He remembered some of the name of the home so I decided to look it up. What a surprise we had when we found this:

The History of the Ladies Protestant Home

“Founded in 1859, the Ladies’ Protestant Home was a temporary relief shelter for poor and destitute Protestant women living in Quebec City.”

My dad lived in a Poorhouse!! He lived there for approximately 18 months and has fond memories of living there. He claims he was ‘spoiled’ with attention from all the women. It can be surmised that his mother, my grandmother, probably paid for their stay there as she was gainfully employed.  Eventually my dad was moved to another facility as he had developed childhood tuberculosis.  He survived along with his remaining sibling.

His mother eventually remarried and took her children back. They moved to Halifax, Nova Scotia when my dad was a teenager, met and married my mum and they have remained in the province for all these years. My dad is now 80 years old.

For all of these years, he did not realize what kind of facility he was living in and then his daughter writes a book about poorhouses in Nova Scotia. Kind of ironic, don’t you think?

The Poor Laws of Nova Scotia were based on the Poor Laws of England and came over from England with Edward Cornwallis. Within a year of arriving in Nova Scotia, the first poorhouse/jail was set up on the site of what is now the Governor General’s House at the end of Spring Garden Road, on Barrington Street.

The criminalization of poverty began in Nova Scotia and continues to this day.

A friend and sister blogger, Flora Doehler, sent me this link on a podcast about the Poor Laws in England. It is a very interesting read, particularly if you want to know more about social history of poverty in Nova Scotia. It’s a fascinating listen!!

The month of February was a very active month, talking about Poor Houses of Nova Scotia all over the south west end of Nova Scotia in several of the libraries. I was in Lockeport at the Lillian Beham Library last week (the orginal date in February was re-scheduled because of the weather) and had the most DE-licious date squares! (Thank you Danielle!). We had a lively discussion about whether things had changed for the poor or whether they have remained the same.

The Senator Ambroise H. Comeau Library in Meteghan was great fun and so interesting talking about not only the local St. Mary’s Poor House but also Cy a Mateur. Here is a piece about him on https://www.canadianmysteries.ca/sites/jerome/contextes/normalite/indexen.html

“Cy à Mateur (Celestin, son of Amateur Trahan) was a contemporary of Jerome. In fact, they died the same year, in 1912. Cy was a highly skilled cobbler, but also very poor. According to the inhabitants of St. Mary’s Bay, including his neighbours in Meteghan, Cy was not normal. He was an angry, violent person. He drank a lot, played cards and gambled. He didn’t go to Mass on Sundays, and didn’t take communion. He was reputed to have sold his soul to the devil and to be a witch. People said he could change into a bear or fly to Boston by surfing through the air on a wooden plank. Cy really and truly existed. Today, he would have received government assistance in the form of Social Welfare payments and his doctors would have insisted that he take therapy and be treated for alcohol addiction. But in Jerome’s day, Cy was shut up in the Meteghan “Poor House” and rejected by all.” 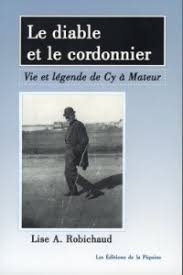 Author Lise A. Robichaud gifted me a copy of her book Le diable et le cordonnier: Vie et legende de Cy a Mateur. Thank you again Lise! I’ve got my French-English dictionary out and my French classes are coming back to me.

In the Isaiah W. Wilson Library in Digby, it was standing room only! We talked about not only the Marshall Town Almshouse, but the other poor houses in the area (Clementsport and Bridgetown) and discussed the possibility of Guaranteed Annual Incomes in Canada.

Clarke’s Harbour Library discussion and presentation was at the beginning of February and, although the group was small (7 people), we swapped stories and facts about the Barrington and Shelburne Poor Houses.

The staff at all of the libraries were WONDERFUL and so welcoming! Thank you to Joanne Head for inviting me and thank you to my husband, Kent Folks, for driving me all over this part of the province and listening to my presentations. I’m sure he could do them himself now.

Next presentation coming up is April 3. I shall keep you posted.

Hey Lockeport! Let’s talk about poor houses in your area this evening at the Lillian Bentham Library, 35 North Street at 7 pm!

Bring your stories and questions. I’ll bring some books with me. If you already have a book and want it signed, bring it with you.

Hope to see you there!! 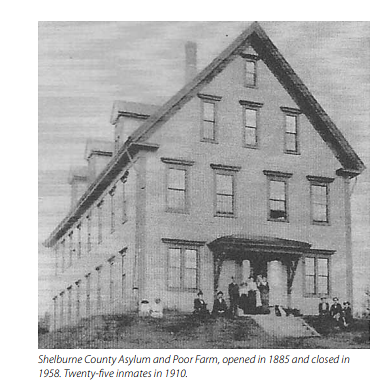 Looking for your School Teacher Ancestor?

24 Hours in the Past – The Workhouse

A signed copy of the book A Wholesome Horror – $15.95 plus postage 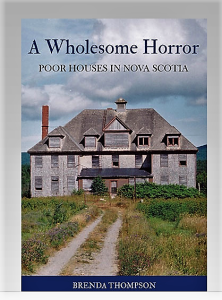